Daughter of Dr. Milton H. Erickson and Elizabeth Moore Erickson, Betty Alice or B.A. (for friends and family) was the Erickson child that came the closest to walking into her father’s big footsteps. Always curious, interested, even inquisitive and with an open mind, from an early age, B.A. learned from her father without realizing what an unconventional and extraordinary person her psychiatrist-father was: ‘To us, Daddy was…well…just Daddy.’ B.A. was, like her father, full of stories and she liked to share her stories.

She once told me how, when very young, she suddenly told her father that after high school, she wanted to emigrate to Australia. Deep down she expected (and hoped) that he would immediately rebuke that idea. But, to her surprise, he endorsed it on the spot: ‘Well, B.A., if that is what you want, you should do it. I’ll give you a small sum for starters and then you are on your own’.

B.A. told me: ‘Now there was no turning back. Only when I arrived in Australia, I started to realize that his sudden decision was Daddy’s way of showing total confidence in me’. What further honed her resilience and perseverance was that, on her day of arrival down under, B.A. lost all of her valuables, money and passport. She was scared, lonely and hungry for several days. She solved her predicament, but this experience helped her to adopt a lifelong habit of never travelling without food in her handbag.

And travel she did throughout her life: she visited the world while teaching her father’s work. Back in the US, she started working with children and at the same time worked closely with her father at the time when he founded both the American Society of Clinical Hypnosis and the American Journal of Clinical Hypnosis in the late fifties. Dr. Erickson eventually chose to leave the honorary president gavels that he received for this achievement to B.A. Knowing their meaning and value B.A. regarded these trophies as her most precious belongings. 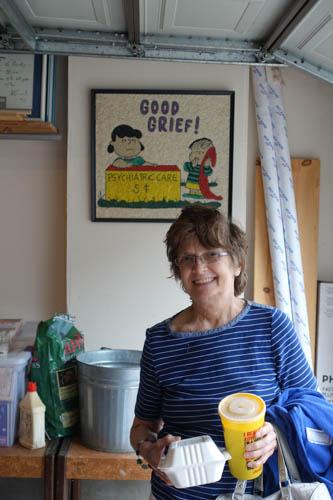 After that period, B.A. married a fighter pilot, had two sons, David and Michael, and adopted a Vietnamese war orphan, her daughter Kimberly. Together they moved their life wherever the US Air Force sent her family. Stationed in Ethiopia, she went to obligatory cocktail parties with the brass when she met the local army psychologist. He was enthusiastically talking about a fascinating workshop that he had been to in Phoenix, Arizona where this great psychiatrist taught him all kinds of interesting stuff about hypnosis and psychotherapy. Only after talking with him a while, did B.A. find out that this famous psychiatrist’s name was Dr. Erickson, to which B.A. replied “Daddy?”. That was the first time B.A. became aware of the importance of her father in the professional world. Until then, Milton H. Erickson was …just…Daddy.

For many years, even as a child and youngster, B.A. worked with her father as a hypnosis subject in workshops, sitting in on the discussion that Dr. Erickson had with his many visitors like Gregory Bateson and Margaret Mead. Like all the Erickson children, with the exception of the eldest children who had already left home and the youngest who were simply too young, when Dr. Erickson was in the prime years of his career, B.A. observed, witnessed, participated, absorbed, and learned from the daily life at her home where there was little difference between work with patients and private family life.

After she left home to take care of her own family, she did a lot of work with children with behavioral and even psychiatric problems. She told me of the many letters and talks she had over many years with her father about these cases and how her father always had an answer for all her questions. Slowly, unconsciously, step-by-step B.A. learned all there was to learn from her father. None of these lessons were formal. All learning happened by tales and stories with an experiential aspect to them. For example: when B.A. had her second child Michael, she had not visited her parents for a long time. As the Erickson home was so small and filled with patients coming and going, she had not been able to have a private conversation with her father. This did not amuse her. After her second baby she had gained some weight, and she did not like that. One noon, after lunch, Erickson was reading the newspaper and B.A. walked up to him and told him -through the newspaper: ‘Now Daddy, you are such a famous psychiatrist and innovator in hypnosis and psychotherapy. Patients come from all over to consult with you. You have written all these books and people write books about your work. So you certainly must be able to prescribe me a diet that will help me lose weight.’ At that moment, her father slowly lowered his newspaper, looked her straight in the eye and asked her: “B.A., are you really sure that you want me to prescribe you a diet that will help you lose weight?’ ‘Oh, uh, no Daddy, no thanks’. 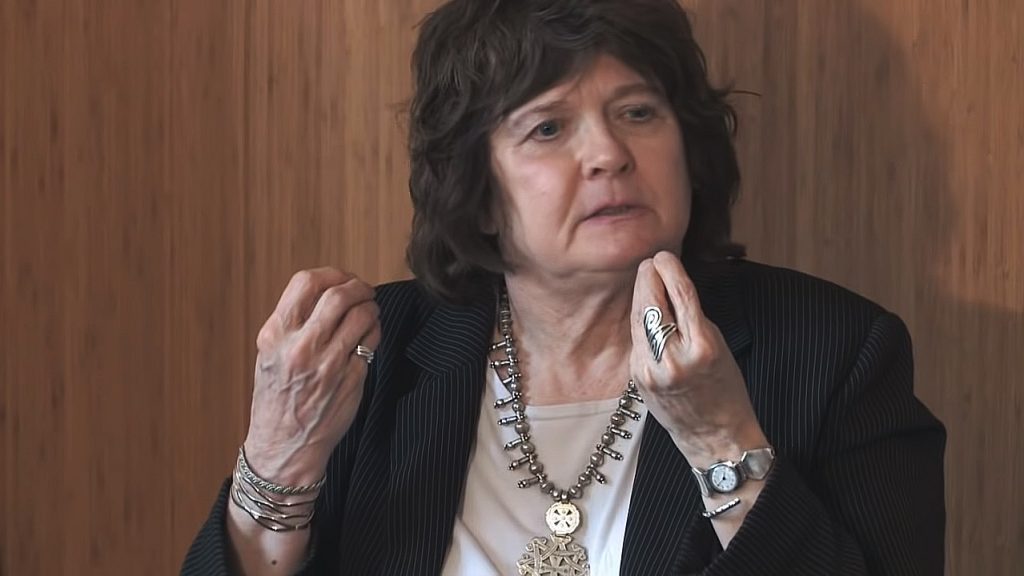 This story is a hologram of the Ericksonian way of thinking and working: a respectful yet iron fist in a velvet glove that helps the clients choose to (re)take their own responsibilities.

For at least the past 25 years, B.A., in addition to her private practice, was invited to teach her version of her father’s work, all over the world. She was a wonderful presenter who captured the audience with her presence. B.A. was the closest you could get to the real Dr. Erickson. When her deep blue eyes locked in on you and in minute details she let you experience that, at that moment, you were the only person that was of importance in the whole world; she created connections with her patients and with her students that opened up the hearts and minds.

I personally had the honor of inviting B.A. many times, do workshops together with her and she even granted me the great honor of accompanying me to teach in China. Always, she created an almost instant connection with her clients. Always, clients and students were deeply impressed by the way B.A. was able to help people again help themselves. When I met with these students afterwards without B.A., they always shared their deep learning experiences with me. The most impressive of these experiences was that there was no discussion of the technique that was used, none whatsoever, just the connection that BA made with them.

Since I am a professional who not only teaches but also organizes a lot of training seminars, I have seen many professional trainers work. As a matter of fact, for the last 30 years, I have had the opportunity of participating in workshops with most of the professionals in the field of psychotherapy and Ericksonian work. Undoubtedly, B.A. surpassed them all. Surely, some of them offer great teachings, interesting technical insights, etc. But only B.A. was able to let you experience what the work of Dr. Erickson felt like and meant. Like her eldest brother Bert who is now the Pater Familias of the Erickson family told me: ‘B.A. is special, she always has been special.’ Bert is correct: B.A. is special and now that she no longer is amongst us, we have to say: B.A. was special.

But we are lucky. She left many hours of YouTube tapes, many articles, many book contributions and especially three of the most important contributions to the Ericksonian catalogue. 1. Primed by Bradford Keeney, she wrote the finest book ever written about her father and his groundbreaking work: ‘Milton H. Erickson, An American Healer (2006)’. This book is a must read when one wants to deeply understand the work of Milton Erickson. Furthermore, it was written with a daughter’s heart. 2. Together with her brother, Allan Erickson, she coproduced a video documentary ‘Ericksons on Erickson’ about how it was when her father was in his prime years and at the height of his professional acumen in the 40-, 50-, and early 60-ies. In this documentary, many myths and legends about Dr. Erickson are simply debunked. ‘The legend that patients walked in unhealed and stepped outside healed is just a legend. That was not the father we knew’. 3. The Canoe Diary: In order to strengthen his health after a near fatal polio attack and in preparation towards medical school, the young Milton Erickson undertook a solo 1200-mile canoe trip. During his trip, the 21-year-old Milton wrote a detailed diary. This Canoe Diary is a coming of age document in which many defining aspects of the person and professional that Dr. Erickson would become, are foreshadowed.

In 1956 Dr. Erickson gave the diary to his son Bert and daughter-in-law Lillian because they –as suggested in the Canoe Diary- made their honeymoon trip in a canoe. For decades the actual diary was kept in a drawer in Dr. Erickson’s office. Although his canoe trip and the diary are famous, the content was totally unknown until Betty Alice Erickson published excerpts in her book ‘Milton H. Erickson, An American Healer’ (2006). Strangely these excerpts were based on transcripts of color Xerox copies that were secured by Allan Erickson. The original copy has mysteriously disappeared. When the bibliophilic edition Canoe Diary was published in 2017 (www.miltonericksoncanoediary.com), the Canoe Diary finally found its way home to the owners Bert and Lillian. B.A. was proudly present. 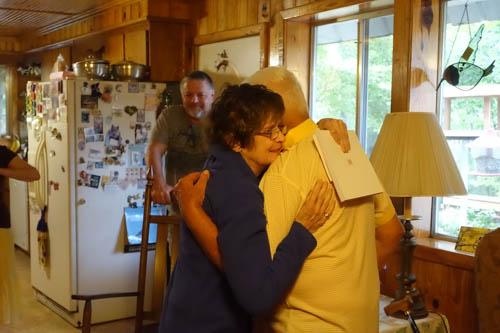 Like already mentioned, she travelled the world, teaching her father’s work in such a manner that sponsors kept asking her back, again and again. But these worldwide sponsors all were local professionals who got to know B.A. and her work through the grapevine. B.A. -evident to everybody who has ever participated in a workshop with her- was the embodiment of her father’s work.

Her resilience shined throughout her career. Not everyone always accepted her. Some may have been intimidated by her. When she was not endorsed, supported or recommended by colleagues, while it bothered her at times, she refused to act any differently in order to be accepted. This was the same path her father took in the 40’s and 50’s, and the 60’s. He was controversial because he was not following the official path of the psychiatric profession. Dr. Erickson was a trailblazer. B.A followed in his footsteps and she paved her own path. It was B.A.’s resilience and her love for her father’s work that kept her going, and it was this resilience that was the cornerstone of her life’s work and her success. 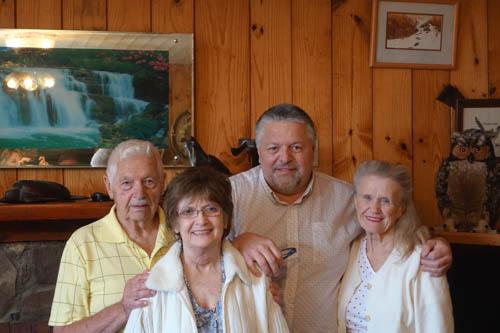 Written by Louis Cauffman on the invitation of her children and endorsed by her brothers Bert and Allan Erickson and her niece Nicole Erickson.

You may leave some thoughts, memories  or personal words of remembrance at the bottom of this page. We will share them on this site and with the family after review. We also invite you to share this obituary with your network by means of facebook and/or Linkedn.